Webwise.ie / News  / Evanna Lynch – Thoughts on Bullies, Cyber-Bullies and My Experience of the Internet 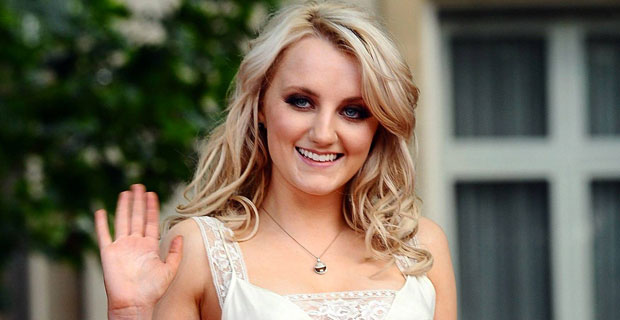 Article By Evanna Lynch – Evanna is an Irish actress, currently based in L.A. Evanna rose to fame after appearing as Luna Lovegood in the Harry Potter film series.

A lot of things happen when you become ‘well known’. You very suddenly get a lot of money, a lot of new friends, a lot of internet hits, a lot of double takes, a lot of marriage proposals, free meals, tickets and memorabilia. A lot of merits-you-haven’t earned and things-you-are-too-young-to-appreciate. You get open doors, countless opportunities and many other wonderful things. But, alongside that, you also get mean strangers writing cruel things about you under anonymous usernames on the internet. ‘Haters’, as Justin and Miley refer to them. Sad, miserable people with too much time on their hands. Cyber bullies. And somehow the internet-hate is what lingers and features in your thoughts far more prominently than the horde of heavenly blessings and beckoning opportunities.

I was somewhat prepared for the inevitable internet onslaught in the wake of my casting. I was already an active member of the Harry Potter internet fan community and had seen how quickly passion turned to rancour when a beloved book series and the specifications of its characters were at stake. I’d even admitted to my dad, after one of the auditions where I felt I’d blown my chances, that I would forever despise the awful girl who did eventually get Luna’s role, and would never be able to watch another Potter movie again.

But there is nothing quite like seeing hundreds of nameless, faceless strangers on the internet take a picture of you and ruthlessly analyse and tear it apart, pixel by pixel.

Actual people discussing your hunched, guarded posture, or your too heavily bleached hair or chubby pre-pubescent cheeks. Awkward, embarrassing things which were previously only tearfully acknowledged by a lonely teenager in the privacy of her own bedroom, now seemed fair game for all the internet to objectify.

The thing about internet hate and cyber bullies is that it isn’t the anonymous trolls or their nasty comments that hurt you. It’s that the countless comments declaring you ‘too fat’, ‘too ugly’, even ‘too stupid-looking’ are perfect echoes of the vicious, hateful thoughts that constantly circle your own mind as an insecure young person. When verbalised these thoughts seem all the more real. Hidden behind obscure usernames, stripped of identities and flaws these faceless voices accrue more power, somehow becoming The Voice of Truth. And when you’re 14 years old a comment suggesting you don’t belong somewhere you already feel entirely ill-fitting can seem like the loudest, truest most resonant voice in the world and can totally shatter your already delicate self esteem.

For the sake of my own sanity, I learned to keep away from the public forums of the internet. It wasn’t until three years ago, that I began to regard the internet as a friendly environment again, when I was coaxed to sign up for a Twitter profile. I signed up merely to discredit the many fake profiles that sprung up in my absence, depicting me as an inane, solipsistic airhead who spent most of her time devising quizzes on her apparent favourite topic of all time -herself- to entertain the 25,000 (!!!) followers who mistakenly assumed it was me. I never intended to interact with people or even check my ‘mentions’. I was keen to do like those other enviably cool and classy blue-tick twitter customers: state my existence but then maintain a quiet and aloof distance far above the hubbub of millions of people sounding off about anything and everything at once. Anyone who follows my twitter now knows that that is NOT what happened. One of my favourite things is geeking out and exchanging tweets with my fellow Potter fans when Queen Rowling drops another fandom-quaking bomb (A giant Romione mistake?!). And all because when I joined twitter I was met, not with negativity and combative forces, but with love and jokes and inspiration and kindness.

The loudest and most significant message that emerged among the tweets, and that is reiterated to me on a daily basis, is ‘You gave me the courage to be myself’. I by no means take credit for this awesome, lofty achievement. I portrayed a character who represents self-acceptance, freedom and who wore her weirdness like a fabulous rainbow coloured faux-fur coat; loud and proud. I’m simply a figurehead for her followers who want to overcome the bullies (at school and within themselves) by embracing and celebrating their differences, flaws and quirks. And I’m proud to be that. But also grateful because through it I encountered amazing young people who were inspired by Luna as I was, and were brave enough to accept their differences. Not only that, but I’ve seen these young people form groups and armies and more importantly, friendships that give them a space to support and encourage each other through hard times.

They showed me that while the internet is a very open, insecure and at times unsafe place, it can also be a forum for friendships, and inspiration, shared ideas and collaborative art, if (crucially if) that is what you seek.

I usually look at my experience of the internet as a reflection of my own state of mind. There is hate or love, creativity or destruction, cruelty or kindness, all out there for the taking. If you spend your browsing time on offensive forums you are probably battling some serious inner demons and have a hard time looking at yourself in the mirror. If instead you gravitate towards cool blogs, educational websites and motivational articles than it’s likely that you’re in a good place. And if you just spent three hours aimlessly flicking through old friends’ Facebook pages, you probably need a new hobby.

I am not a key target for internet abuse. I steer very clear of conflict. I have never broadcast my political views, never dated a known lusty tween icon, and have carefully towed the line on twitter of avoiding saying inflammatory things that could possibly provoke the ire of the Beliebers/Directioners tween-beast. And yet each week on twitter I find that I have to temper my gut reaction to defend myself against the one derisive, mocking comment that is crouching meanly in the corner. Because there is always one of those and it is that very one that threatens to drown out all the positive comments and can ruin an otherwise perfectly fine, productive day. They say we remember a compliment for 2 weeks and an insult for 14 years. Just as I am about to single out the one troll and prepare to fight venom with venom and fire, I pause and think what kind of person that makes me. Someone who doesn’t care about the dozens of pure, generous souls who offer kindness and support, and instead lavishes time and attention on the one miserable leech who wants to see her crumble?

I stop, delete the offending tweet, maybe block the user and focus my attention on the people who remind me to see the beauty in the world and in myself.

I don’t think we’re ever strong enough to read the hateful stuff and let it roll off our backs. It’s all very well for the self-help books and bespectacled psychiatrists to dole out the very grand advice to simply ‘love ourselves’. What the hell does that mean to the 13-year-old who’s put on 15 lbs and is told every day at school she’s a fat pig that deserves to die? Essentially ‘loving oneself’ is the answer, yes, but as a hyper aware, introspective, self-help book consuming 22-year old I have already deduced that that is a mission that takes a lifetime of learning, forgetting, crying-in-your- car-that-you’re-a-giant-failure and relearning all over again. You may as well tell the thirteen year old to sprout a pair wings and fly, far above all the bullies and the rocky road through puberty.

No, it’s not about demanding of ourselves to instantaneously love ourselves. It’s about consciously choosing light over dark. It’s about realising that even if we don’t have the strength to stare these hurtful comments plain in the face and say ‘you’re wrong’, we have the strength to search for those people who will convince us that the bullies and the nasty things written about us, or others, are wrong.

And it’s about practising that positive outlook every single day, with every person, in everything we do until eventually –eventually- that becomes a habit.