Yesterday morning was a very early start for me as despite being on my school holidays, I made my way in the wonderful summer sunshine to Templemore train station to catch the 6.28am train to Dublin. This early start was to attend the official launch of the Action Plan for Online Safety 2018-2019, in the creative surrounds of the Royal Hibernian Academy. I was attending as a member of the Webwise Youth Panel and was delighted to see the student voice well-represented with my fellow Youth Panelists Nacé, Seán, and Eiman, and our friends from Clare Comhairle na nÓg. 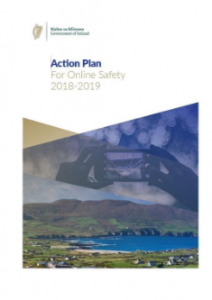 This Action Plan is a product of working with stakeholders across the country – a process that I was proud to be a part of as a Webwise Youth Panelist earlier this year when I took part in the Open Policy Debate held at the Royal Hospital Kilmainham in March. You can read about that Open Panel debate in my blog post about the day.

Just like the Open Policy Debate, the launch of the Action Plan reflected the investment of different government departments. The plan was launched by An Taoiseach, Leo Varadkar TD, and involved the Department of Communications, Climate Action , and Environment; the Department of Education and Skills; Justice and Equality; Children and Youth Affairs; Department of Health and last but not least, the Department of Business Enterprise and Innovation. This, in itself, shows how the internet and concerns about online safety touch so many aspects of our lives

An Taoiseach officially launched the plan, which for me was an indication of how serious the issue of online safety is viewed by the government. In his address, an Taoiseach referred to how “the internet has transformed our lives” and acknowledged the complexity of online safety, stating that “this problem cannot be solved with one simple step but with many”. I was encouraged to hear him refer to the role of a range of stakeholders in improving online safety: “Individuals, parents, educators, industry and law enforcement all have roles to play in making the internet a safer place” and we too, as young people, are keen to play our part in this, whether it be formally through Webwise and Comhairle na nÓg, or informally through taking steps to be aware, safe and ethical online.

An Taoiseach launching the Action Plan for Online Safety and Minister Denis Naughten speaking at the launch.

Minister Denis Naughten TD, Department of Communications, Climate Action and Environment who had hosted the Open Policy Debate also spoke at the launch. Minister Naughten, in his speech, noted that “the digital world is full of wonderful opportunities, but it also combines anonymity and distance too easily. To effectively respond to these risks and dangers we need to work better together as a Government, along with communities, parents, and providers. This plan provides the structure and the blueprint to do just that”. It was refreshing to hear the Minister remind us of the potential benefits of the internet on a day clearly focused on being safe online. I hope that the actions outlined in the action plan will allow us all to benefit from the wonder that is the internet in a safer environment.

Minister for Education and Skills, Richard Burton TD, also highlighted the opportunities and challenges presented by the internet and spoke of the need to “work together to raise awareness of the benefits of new technology while safeguarding our children online” in a 2fast changing 21st century”.

The theme of involving a wide range of stakeholders was again highlighted by the contribution of Áine Lynch from the National Parents Council. Parents have an unenviable role in protecting both themselves and their children online. The ever-increasing digital world is clearly illustrated in some of the CSO statistics in the Action Plan and some facts from the 2015 Net Children Go Mobile  report led in Ireland by DIT’s Professor Brian O’ Neill and Dr. Thuy Dinh. The figure in the report from the past three years indicate how this challenge for parents is growing.

The pace of this change over the last 11 years is very clear from this graphic on page 13 of the Action Plan:

This is a staggering change, one I was shocked to see has happened in my childhood from the age of 5 to 16. Sometimes, we as teenagers need to remember this rapidly changing pace -something I need to remember in my own ongoing arguments with my own parents about screen time! Webwise provides a wide range of resources and information to support parents in developing their understanding of online applications and games which is constantly updated to take account of the wealth of new online environments we inhabit as young people.

So, to the Action Plan itself. It outlines twenty-five actions centred around five central goals which are detailed in the plan available via www.gov.ie/besafeonline. Each action is broken into smaller elements and has a timeline and details of the government departments responsible for the action. An insight into the development of the plan can also be watched here.

Twenty-one of the actions come under the umbrella of these five goals with an additional four actions which are centred around overseeing the implementation of the Action Plan. Minister of State Seán Kyne, who also spoke on the day has been appointed to ensure that the stakeholder approach, that has been part of the development of the Action Plan, is continued. Action 22 provides for the setting up of a Sponsor’s Group. Action 25 makes an important reference to funding and resources – this for me is a key action as online safety initiatives need to be adequately funded – who could put a price on our safety and the safety of future generations?

Looking at the goals individually, there is a clear commitment in the actions to education, information, training, legislation, and policy development.

Goal One: Online Safety for All provides a central information point via www.gov.ie/besafeonline. and focuses on digital citizenship and community computer classes.

Goal Two: Better Supports focuses on supports for parents, education and student participation such as Safer Internet Day which is coordinated in Ireland by Webwise

Goal Four: Influencing Policy has actions which focus on policy developments both at national and EU levels. Some comments on the Action Plan in the media have been critical of the fact that it does not create a Digital Safety Commissioner. Action 18 indicates that this is in the pipeline, which Minister Naughten also referred to in his address yesterday.

Goal Five: Building Our Understanding focuses on the ongoing work surrounding the Action Plan. I was delighted to see the reference in Action 21 to ‘consultation with children and young people.

One of the most significant developments under the Action Plan is the setting up of a National Advisory Council for Online Safety. This will be chaired by Minister for State Seán Kyne and will review national and international research, identify emerging issues and will be comprised of ‘education stakeholder including industry, academia, voluntary sector, children/young people and parents’. I hope that I and my fellow Youth Panelists and Comhairle na nÓg members will continue to have an opportunity to represent the student voice under the Action Plan and through this new National Advisory Council for Online Safety.

Overall, this Action Plan certainly is a welcome development. The fact that it focuses on all stakeholders is good as we all have a part to plan in supporting online safety. Industry have a key role to play as they have a lot of power, in particular in terms of apps and social media so it will be interesting to see how they respond.

There is a focus on education for all – in schools and communities. Nelson Mandela famously said “Education is the most powerful weapon which you can use to change the world” and this is also true of the ongoing challenge in keeping ourselves safe online.

Eiman, Nacé, Seán and myself pictured with Webwise Project Officer, Jane McGarrigle at the launch.

It is also positive to see that the Action Plan is only outlining actions for 2018-2019 – an 18-month period in total. Hopefully, this shows that the Taoiseach and the six departments are committed to concrete actions that will build a foundation for ongoing work to promote online safety. As seen in statistics in the Action Plan, the online world changes so quickly that a long-term plan would be outdated after a year or less. The key message is that we all want a safer internet and that we need to work together to ensure that everyone is as well-informed as possible so that we can all benefit from the many advantages of being online.

Thanks again to Jane, Aideen and the team at Webwise for the opportunity to be part of this exciting development!