In Advice for Teachers, Teachers

Teachers often have many questions about how to incorporate the technology carried by students into e-learning. Now, almost everyone, young and old, carries some sort of technologically advanced personal device which can connect to the internet – whether it be laptops, smartphones, tablets etc. BYOD, or Bring Your Own Device classes can be quite intimidating for teachers and there are obvious network security and child protection issues. However, there are also significant benefits to this style of e-learning. Here, Webwise is republishing a blog post by Donal O’Mahony, a secondary school teacher at Portmarnock Community School in north Dublin. The post outlines how Donal went about organising and running a BYOD lesson in his school. And it also includes a useful social media policy drawn up by Donal and incorporated into his school’s Acceptable Use Policy.

The First Ever BYOD (not BYOT) Class I Taught

Apologies in advance for what I think will be a rather long post about BYOD/BYOT – the acronym for Bring Your Own Device/Technology.

I taught my first class in Portmarnock Community School today using BYOD, asking a first-year class of students (aged about 13) to bring a phone, camera, iTouch or similar device to school.

Out of thirty, about fifteen brought in a device.

The subject in question was Information and Communications Technology and the class was one hour and ten minutes in length, a “double” in the parlance of Irish secondary schools.

The class took place in a computer room with thirty functioning PCs.

I had previously registered the students with Codecademy and we had started some simple programming/scripting using Java Script(JS).

Some of them didn’t get the idea of programming, so scratching my head, I had them look at a YouTube video called “What is Java Script?”. It is very good on the concept of static Vs, dynamic webpages, building from definitions to examples, showing how JS adds dynamism to a basic web-page.

I decided to develop this concept of static and dynamic dividing the students into about eight groups of three/four, mixing boys and girls and ensuring there was a device in each group.

There were a number of stages to the class:

As of this evening, one group has uploaded their work to the Flickr account. I have added some photos that I took also.

What I was surprised at, was what I did not capture – the students in some groups had a great discussion of the nature of web-pages. The use of audio would be interesting here to record this learning. 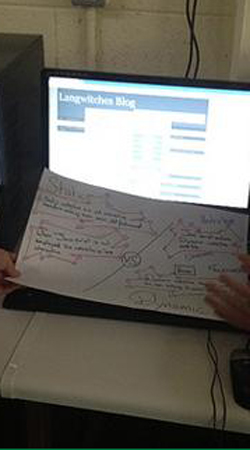 There was no doubt as to the engagement of many of them – I was lucky that this particular room has large tables in the centre where they could position their sketch and draw. There was an element of negotiation in their work and movement between the groups, the PCs and the area for drawing.

I asked them to keep faces out of the photos for the moment – that did not seem to bother them.

I also realised I had never really thought through the differences between between BYOD/BYOT.

I was searching through recent publications this evening and came across an Australian publication “Bring Your Own Technology: The BYOT guide for schools and families”(August 2012).

The authors (Lee and Levins) also keep their own blog with the engaging title: BYOT? Bring it on.

They argue that BYOT is about bringing technology into learning – technology is greater than the device.

Lee writes on the blog: “Bring your own technology (BYOT) is an educational development and a supplementary school technology resourcing model, where the home and the school collaborate in arranging for students’ 24/7/365 use of their own digital technology/ies to be extended into the classroom, and in so doing to assist their teaching and learning and the organisation of their schooling and, where relevant, the complementary education outside the classroom”

The Acceptable Use Policy for BYOD in Portmarnock is based on my draft social-media policy for schools here. This is being introduced in the school at the moment – not as an actual policy but as a guideline as to where we might be going with going with technology.

I will also be asking the students to comment on this blog posting!